TAUNTON: In this must-win game for both sides, the approaches of West Indies and Bangladesh – with bat and ball – could not have been more different.

And given that no side had successfully chased more than 248 in this tournament until now, West Indies’ cautious tactics looked to have delivered a very serviceable total of 321, even in Taunton’s tightly-knit environs.

But Bangladesh’s pursuit was bold, brash and brilliant. Led first by Tamim Iqbal and then taken up by the in-form talisman Shakib Al Hasan, who also picked up two wickets with his left-arm spin.

In the end it was not even close, the second highest successful chase in an ICC Men’s Cricket World Cup achieved with seven wickets and 8.3 overs to spare.

His unbroken partnership of 189 with Liton Das, who finished on 94 not out, was the second highest for the fourth wicket in the history of the tournament.

This was Shakib’s day. When he had scored 23, he reached 6,000 ODI runs. He then passed fifty for the fourth time in four innings at this ICC Men’s Cricket World Cup.

When he cover-drove Oshane Thomas for four, he brought up his ninth century for his country and, at 83 balls, the fastest – also the second fastest in the tournament so far.

It was a joyous, highly-skilled display and, given that it set up Bangladesh’s eighth win in ten one-day matches over West Indies, should not even be a surprise.

By complete contrast, West Indies’ total of 32/1 from the opening ten-over powerplay was the lowest of the tournament.

The first time Chris Gayle played for Somerset at the County Ground, Taunton, in 2015, he made 151 not out in a T20 match. 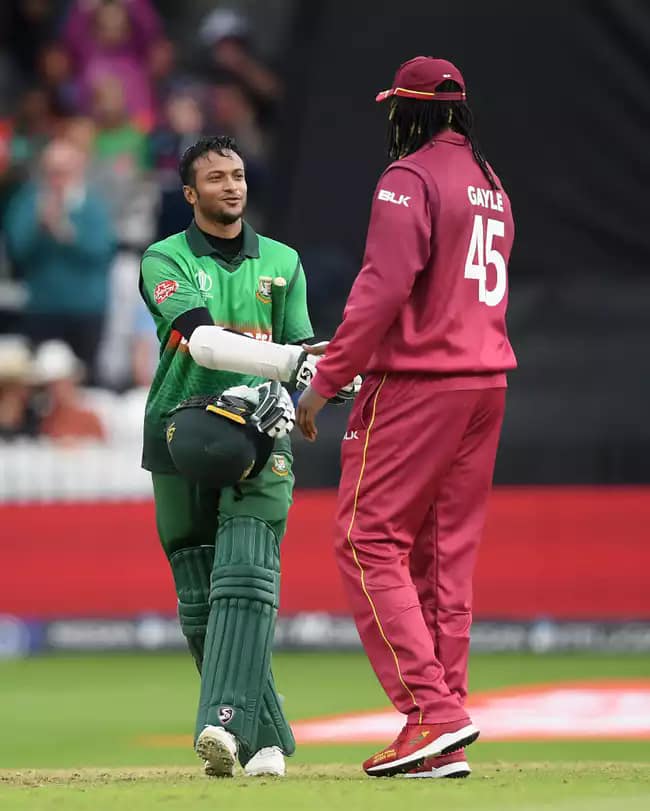 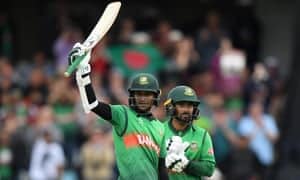 A 13-ball duck was not what anyone wearing maroon (either of West Indies or Somerset) was hoping for, though the majority of the crowd in green and red supporting Bangladesh were far from unhappy.

When it came to Bangladesh’s chase, they hurtled out of the blocks, rattling up 75/1 in their first ten overs.

There are mitigating factors, of course. Bangladesh’s seamers, well drilled by their bowling coach and Windies legend Courtney Walsh, bowled a nagging line. West Indies’ quicks, on the other hand, were content to bang the ball into an easy-paced pitch and paid the price.

Their tactics were one-dimensional. With Andre Russell carrying an injury and no frontline spin option, West Indies’ bowling lacked variety and sophistication.

West Indies skipper Jason Holder had called for a more disciplined approach from his batsmen – or “smart aggression” as he put it – and broadly speaking he got it.

Shai Hope’s 96 from 121 balls was a model of self-restraint, notwithstanding the eye-catching forehand smash for six he played off left-armer Mustafizur Rahman in the 35th over. He had hit only three boundaries in his 58 up to that point.

West Indies took 19 off that over and 17 from the next in a shackle-breaking period that also included a missed run-out opportunity for Bangladesh.

Holder himself was in no mood to hang around. He launched his first ball over the ropes at what is affectionately known as the graveyard end. It was appropriately named, as it was where both Nicholas Pooran and Shimron Hetmyer perished as, later on, did West Indies’ hopes.