Along with staging numerous cricket tournaments in 2012 as depicted from the summary below, one of the main highlights of 2012 was the inclusion of Shoaib Akhtar in US Open T-20 Cricket Tournament. 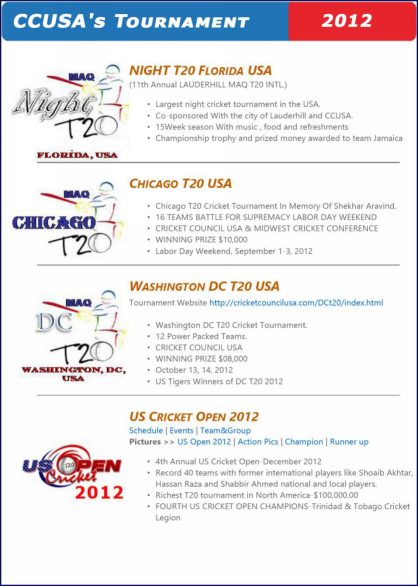 Shoaib Akhtar hails from Pakistan. He is the fastest bowler in the world. He has played all formats of cricket representing his country Pakistan successfully in a 14 year long career that started in November 1997 in test format leading to debut for One Day Internationals three months later in the same year.
Furthermore, CCUSA’s Chairman: MAQ continued to feature in high profile newspapers for his commendable efforts in expanding the game of cricket in the US. As such, his story was published in the Guardian, written by known journalist Vinode Mamchan. Full story available at: https://www.guardian.co.tt/sport/cricket-needs-maq-6.2.429082.492cbbf60e
Written by:
Fizza Abid
Marketing & Sponsorhip Manager
CCUSA