MARGATE/FL – USA: Cricket Council USA on Tuesday honored the life of former Mayor of Lauderhill the Josephus Eggelletion who passed away last November after battling illness.
At a function held at the Lauderhill City Lakes office, chairman of CCUSA Mahammad Qureshi presented the wife of Eggelletion, Carolyn Taylor, a 22 carat golden Eagle. According to Qureshi: “Joe will always live in our hearts for what he did to help bring cricket to Fort Lauderdale. He understood our vision and was right on board to make it happen.”
Taylor in accepting the award said: “Joe had a passion to help people and this is why he would have involved himself in the cricket. He saw the potential and decided that it should get his assistance. We, his family are extremely happy for the recognition given to him by CCUSA. It is good to see that his good work did not go unrecognised.”
Egglelletion, a Broward politician became the county’s first African-American Mayor and it was during his term as Mayor that the much revered Central Broward Regional Park was commissioned. “Joe saw the benefit of giving American youngsters the choice to learn a new sport. Cricket has now grown from just four teams when we first played at Central Broward to 1100 cricket teams,” added Qureshi.
CCUSA, also presented the City of Lauderhill Lakes a plague, in recognition of the support that the City has extended over the years in terms of the development of cricket in the area. Current Mayor Hazel Rogers has always been present at CCUSA matches, giving it her blessings. 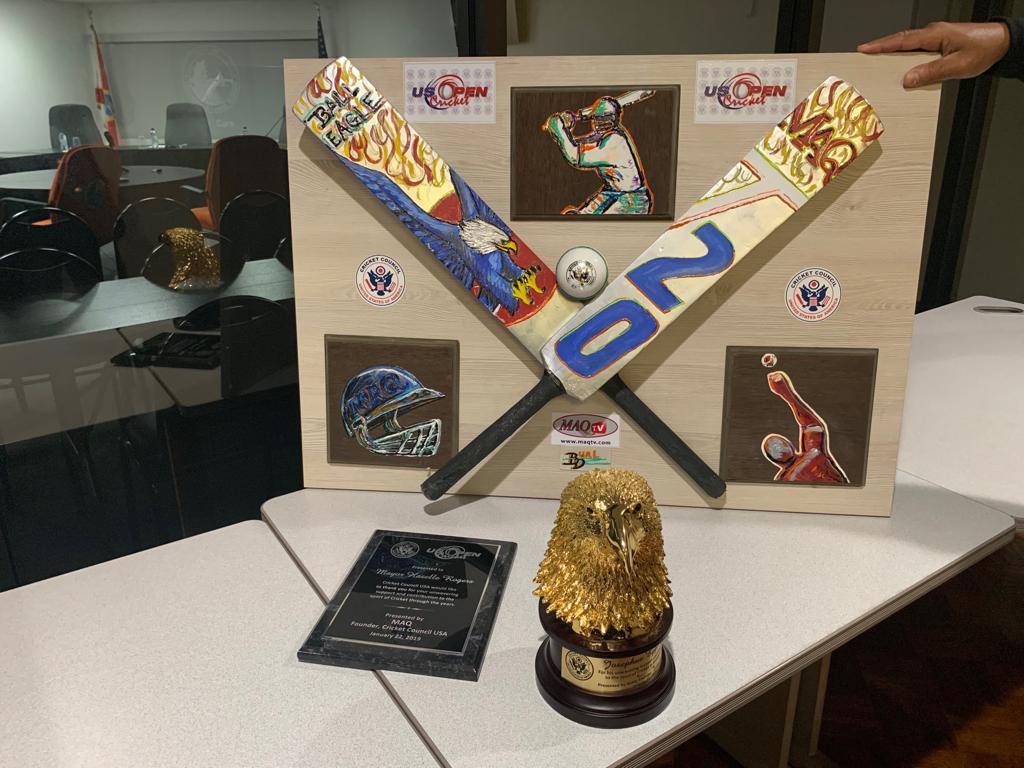 She was also on hand to say a few words: “We have all recognized the efforts of Mr. Qureshi and his cricket group and we are proud to be part of this development thrust for cricket. Continue to push forward for the benefit of the young ones here in America.”
Qureshi who was accompanied to the event by CCUSA officers Sofian Qamar, Rab Masroor, Tanveer Iqbal, Abda Iqbal, and Aasoon Esmire added: “We are very happy that the City has been partnering with us and we will continue our work in assisting in the development of cricket here in Fort Lauderdale. We have made giant strides over the past few years and we will continue to press forward, until cricket becomes a national sport here in America.”