Andre Russell heaped praise on Kennar Lewis after his blitz at the top set up a win for Jamaica Tallawahs against Chris Gayle’s St Kitts and Nevis Patriots.

The Tallawahs backed up Lewis’ heroics with a strong all-round performance in their Caribbean Premier League 2018 match at Kingston on Wednesday, 15 August, to make it three wins out of three.

Lewis’ 49 off 24 balls dominated the Powerplay before New Zealand’s Ross Taylor made the most of a let-off on 6 to strike a half-century and set up the total of 178/4.

The Patriots could never quite get going, with all of the Tallawahs bowlers picking up at least one wicket. Krishmar Santokie, Adam Zampa and Imad Wasim had two each. 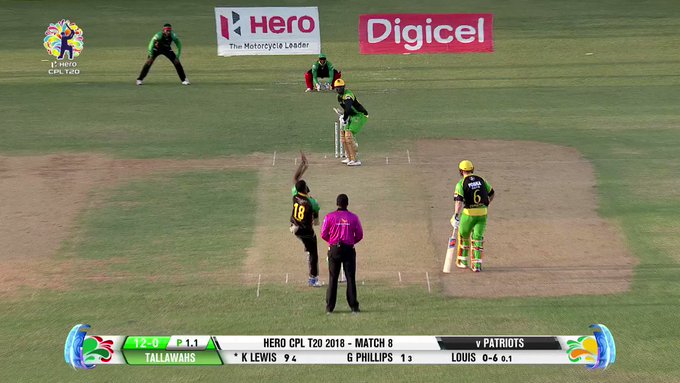 “We know what he can do,” said Russell, after Lewis’ knock that included four fours and as many sixes. “I believe in him and the team believes in him. Happy for him that he got to show what he’s got in front of his home crowd.”

“I am an opening batsman and I did my job,” added Lewis. “I know I can do this job in the first six overs.

The Patriots were left to rue what could have been. Taylor was on 6 from 10 balls when his attempted drive off Anton Devcich didn’t come off. Devcich, though, had overstepped, and Taylor went on to add an unbeaten 51 from 35 balls with Glenn Phillips (41) also stepping on the accelerator.

Their worries were compounded when Gayle injured his hand while fielding, and visibly struggling, was slow to start. He confirmed after the match, though, that his finger was not broken.

One bright spot for them was Nepal’s Sandeep Lamichhane. The youngster took two wickets in the seventh over, including that of Lewis, to set the opposition back and finished with 2/21. However, international commitments will keep him away from the CPL towards the end of August.

“I have seen him play in the IPL (Indian Premier League), he’s a brilliant bowler and can bowl well under pressure,” said Chris Gayle. “We’ll miss him as he’s off to play international cricket.”