NOTTINGHAM: West Indies threw away a golden opportunity to defeat Australia in their ICC 2019 World Cup at Trent Bridge in Nottingham Thursday.
The regional team had Australia tottering on 79 for five and allowed them to get up to 288 on the back of 92 from number eight batsman Nathan Coulter-Nile and 73 from Steven Smith.
They were then handily placed at 216 for five with 11 overs to go when big hitter Andre Russell played one shot too many and lost his wicket for 15. 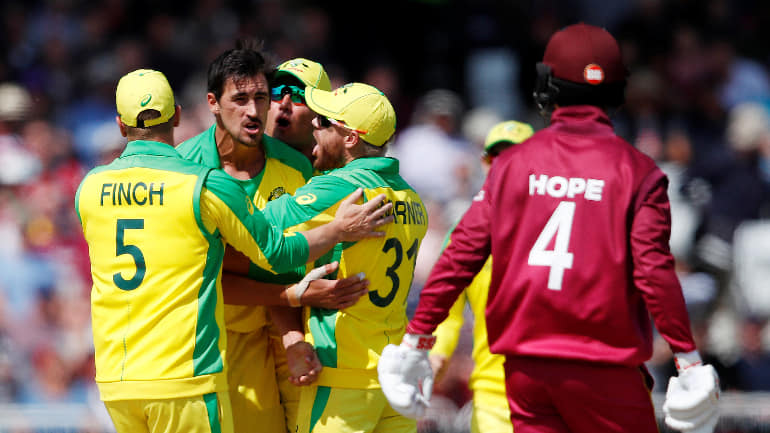 The West Indies fizzled away for 293/9 off their 50 overs despite a fighting half-century from skipper Jason Holder. Big left-arm fast bowler Mitchell Starc grabbed 5/46 to hasten the West Indies demise.
West Indies had a torrid time at the hands of the umpire, as four dismissals had to be overturned on review. Umpires Chris Gaffaney and Ruchira Palliyaguruge both had a horrible day.
West Indies got good starts from Nicolas Pooran who made 40 off 36 balls with five fours and a six and Shai Hope 68 off 105 balls with seven fours.
However, they needed one to carry on to a really big score but it was not to be. When Holder left for 51 off 57 balls with seven fours and a six, the writing was on the wall.
Earlier, Windies won the toss and just as they did, against Pakistan they asked the opposition to have the first strike. There was action in the very first over bowled by Oshane Thomas as he had Warner dropped at mid-on a difficult catch to Carlos Brathwaite.
Thomas bowling at good speeds then sent back skipper Aaron Finch in his second over, caught behind for six. Couple balls later he crashed into the helmet of Usman Khawaja. This would have brought back memories for Khawaja as he was felled by a similar delivery from Andre Russell during the warm-up stages.
Soon after a salute came from the opposite end as Sheldon Cottrell struck. The soldier got the prized scalp of David Warner caught at backward point for three by Shemron Hetmyer.
The Windies bowlers continued to pepper Khawaja and Andre Russell in his first over accounted for him caught brilliantly by a diving Shai Hope for 13.
At 36 for three enter Glenn ‘Big Show’ Maxwell who ended up being a no show as he was caught behind by Hope trying to pull a delivery that was not short enough to play the shot.
Steven Smith and Mark Stonis then brought up Australia’s half-century of 69 balls. Stonis, in particular, looked in fine fettle as thumped four boundaries but got out pulling a ranked long-hop off Jason  Holder to Pooran at mid-wicket. He made 19 off 23 balls and added an invaluable 41 runs for the fifth wicket with Smith.
Australia’s hundred came up in the 24 over as wicketkeeper Alex Carey finally go going after adding seven runs for the sixth wicket off six overs at one point with Smith. The left-hander reeled off four boundaries in two overs.
The duo brought up a 50-run partnership off 66 balls as they continued to fight back. They added  68 runs off 89 deliveries when the gutsy Carey fell.  The footballer edged to Hope to give him catch number for as he made 45 off 55 balls with seven fours.
Smith battled on with Nathan Coulter-Nile and brought up his fifty off 77 balls with five hits to the fence. They brought up their 50-run stand and also the Australian 200 in over number 39, as the Aussies continued their recovery towards the happy hour.
Smith got out for 73 off 103 balls with seven fours courtesy a brilliant catch by Cottrell on the deep backward square boundary.
Counter-Nile was into over-drive by then and smashed the Windies bowlers to all parts of the park.  He finally fell for an amazing 92, passing his previous score of 34 by a long way. He faced 60 balls and struck eight fours and four sixes. His innings was the highest by a number eight batsman in World Cup cricket.