Sri Lanka’s World Cup could have taken a turn for the worse had it not been for fast bowlers Nuwan Pradeep, Lasith Malinga and the experience of the Afghanistan batsmen.

Set 187 runs to win the match off 41 overs at Cardiff, the Afghanistan team ran out of the blocks quickly reaching 32 without loss off four overs, before the experience of Pradeep and Malinga pegged them back, as they fell to 152 all out.

The Afghanistan bowlers led by off-spinner Mohammad Nabi 4/30, had earlier bowled out the Sri Lankans for 201 in 36.5 overs of the 41-over game. 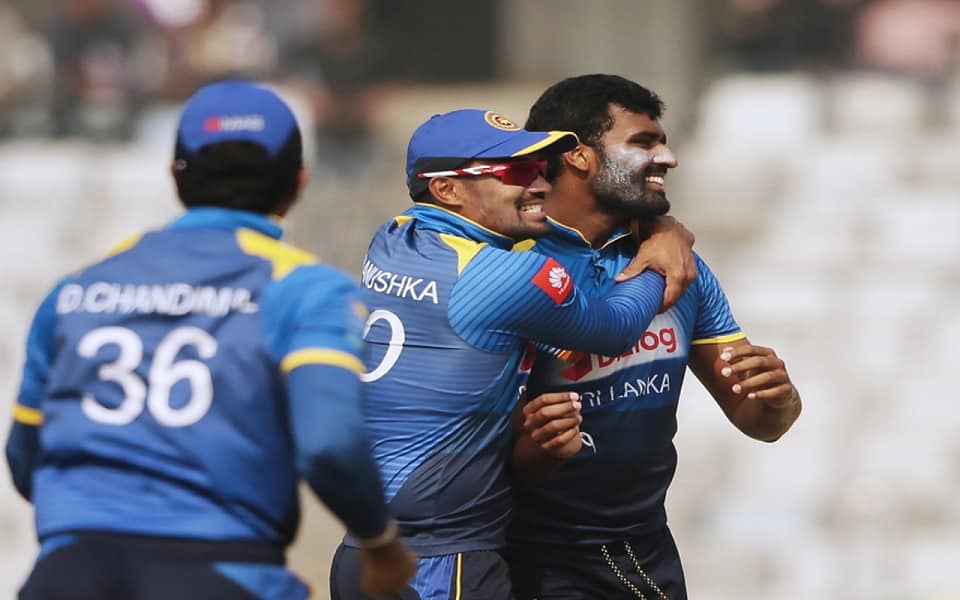 This represented a collapse by the Lankans, as opener Kusal Perera had fired them to 144 for one off only 21 overs. The left-hander who has modeled his game after the legendary Sri Lankan left-hander Sanath Jayasuriya looked the part and hammered the Afghan bowling to all parts of the big ground. He and skipper Dimuth Karunaratne added 92 runs for the first wicket before the skipper fell for 30 off 45 balls with three fours. Perera continued to attack and found an able ally in Lahiru Thirimanne and they the score to 144 when Nabi worked his magic. First, he removed Thirimanne bowled for 25 in the 22nd over and two balls later sent back Kushal de Silva for two and with the last ball of the over the dangerous Angelo Matthews was sent packing for a duck. His five-ball destruction saw Sri Lanka slip from 144/1 to 146/4.

When the rains came the score was 183 for eight off 33 overs and Afghanistani leg-spinner Rashid Khan got the prized scalp of Perera for 78 off 81 balls with eight fours. When the players came back on after a two-hour delay, Sri Lanka was bowled out for 201.

Afghanistan that that point would have haboured hopes of a win but it was not to be as they succumbed to good swing and seam bowling from the Sri Lanka duo of Malinga and Pradeep.