The government has given an in-principle approval to requests from Kuwait and the United Arab Emirates to send Indian doctors and paramedics to help the two Gulf countries fight the Covid-19 pandemic, a top government official told Hindustan Times on Wednesday.

As this team was wrapping up – it returned on Monday – New Delhi received the request for more medical teams. “They were very impressed with the rapid response team,” an official said.

By this time, senior government officials said, another request for Indian healthcare personnel had come in from the United Arab Emirates. There are also similar requests pending from Mauritius and Comoros, the archipelago off Africa’s east coast Comoros, that are battling the disease.

Other Gulf countries have also sounded out New Delhi that they would need Indian medical assistance and are expected to send formal requests shortly.

In response to these requests, the top official said, “an in-principle decision has been taken to allow retired military doctors, nurses and technicians to travel to UAE and Kuwait to begin with”.

For Comoros and Mauritius, the government has okayed short-term deployment of the military’s rapid response teams. These self-contained teams comprise military doctors, nurses and other paramedics.

The foreign ministry and the armed forces are still working out the mechanics of how the medical teams for Kuwait and UAE would be constituted.

“Retired military healthcare professionals – doctors, nurses, lab technicians – who are ready to take up this assignment, can opt to help the Gulf countries,” the official said.

On an average, a top military official told Hindustan Times, about 100 doctors, 30-40 nurses and a few hundred paramedics retire from the Army Medical Corps every year.

Since it would not have been possible to spare serving government doctors at this time, the decision attempts to address the urgent needs of the Gulf countries without compromising with the healthcare requirements of people in India.

PM Modi and Foreign Minister S Jaishankar, who have received numerous requests for Indian assistance from Gulf countries over the Covid-19, had earlier ordered officials to prioritise approvals to their requests for dispatch of millions of paracetamol and hydroxychloroquine tablets.

So far, 45 million hydroxychloroquine tablets and 11 metric tonnes of HCQ’s active pharmaceutical ingredients have been cleared to be shipped on a commercial basis to six Gulf countries, Bahrain, Jordan, Oman, Qatar, Saudi Arabia and the United Arab Emirates. 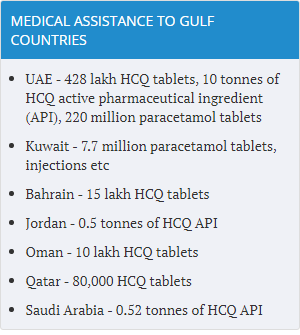 Officials suggest India had gone out of its way to cater to the requirements of the Gulf countries at this crucial juncture, gestures that have been warmly reciprocated by the West Asian countries.

Like when the UAE was packing off immigrants from every other country following the outbreak of the pandemic, India requested Kuwait and the United Arab Emirates to go slow with repatriating Indian nationals because the state governments didn’t have the infrastructure to deal with the influx.

This request was accepted though around the same time, the messaging to the rest of the world was that the government could impose restrictions on return of workers later from countries that don’t evacuate their nationals.

“It is in this context”, a foreign ministry official said, “that the unseemly controversy over a cabinet note in Kuwait should be seen”. The document, which spoke about Muslims being targeted in India, was leaked around the same time that Kuwait was requesting India to make an exception and send Indian doctors and healthcare professionals.

It was an effort by vested interests – possibly linked to pro-Pakistan elements in the kingdom – to influence the narrative around India’s deepening ties with Gulf countries. In any case, a minister in the Indian government said, even at meetings of the Union Cabinet in Delhi, all issues and topics under the Sun are discussed. “That does not mean that the view being discussed reflects the stand of the government,” he said.

Officials underline how the concerns referred to in the Kuwaiti document echoed the narrative that Pakistan Prime Minister Imran Khan had been trying to build for some time.

Foreign minister Makhdoom Shah Mahmood Qureshi had promptly weighed in, calling for a coordinated effort against coronavirus. “Unfortunately, what we’re seeing is that though this virus respects no borders, it doesn’t differentiate between ethnicities or religion — yet in India […] they’re in the grip of Islamophobia,” he said, according to a report in Pakistan’s newspaper Dawn’s website.