Marking its 20 th Anniversary this year, Cricket Council USA entered into a historic partnership
with the highly renowned Pakistan Super League Franchise: Multan Sultans co-owned by Ali
Khan Tareen. Dedicated to its vision of promoting cricket in the US and worldwide, CCUSA and
Multan Sultans signed a Memorandum of Understanding where Multan Sultans will participate
with its six emerging players in the highly successful and popular US Open T-20 Cricket
Tournament held annually in Florida, USA. Whereas, CCUSA will send its USA All Stars cricket
team to play exhibition matches in Pakistan with Multan Sultans in early 2020.

The Memorandum of Understanding was signed by Chairman of CCUSA Mahammad Ahmed
Qureshi and co-owner of Multan Sultans Ali Khan Tareen. After the official signing of the MoU,
MAQ commented: “We have been working hard to improve relations between Pakistan and the
United States through cricket and this move by Multan Sultans is significant in taking the
relationship to another level.”
He further added:
“They are a successful team in the PSL and their presence at this tournament will add a lot in
terms of quality. In addition to the Multan Sultans, a number of other players from Pakistan will
be coming to the US for the tournament. “We have a number of talented cricketers from
Pakistan who have signed on for our draft and we are looking forward to their participation in
our tournament.
“Over the years we have been blessed with good talent coming from Pakistan to play in our
tournament and this time it will be even better.”
Whereas Ali Khan Tareen remarked with the following tweet: 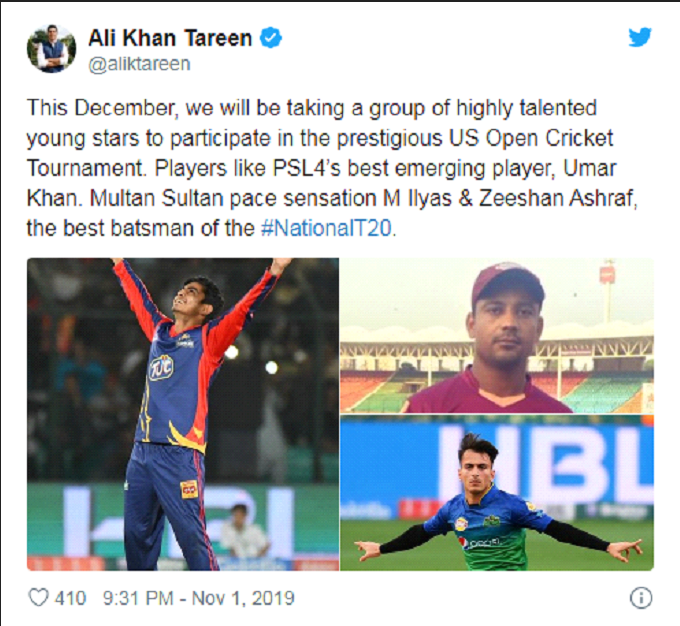