The Pakistan Cricket Board (PCB) on Tuesday decided to postpone the remainder of the Pakistan Super League (PSL) Season 5 due to the increasing number of coronavirus cases in the country.

The mega event has been called off just before the semi-finals and the finals took place on Tuesday (March 17) and Wednesday (March 18) respectively. Table-toppers Multan Sultans were due to face former champions Peshawar Zalmi in the first semi-final at 2pm. The 2nd game of the day was the all-important semi-final clash between rivals Lahore Qalandars and Karachi Kings. The final of the tournament was rescheduled to be played on Wednesday after the PCB moved the tournament up to March 18 from March 22. All 3 games were due to be played at the Gadaffi stadium, but have now been postponed.

IMPORTANT ANNOUNCEMENT#HBLPSLV postponed, to be rescheduled. More details to follow in due course.

PCB made the announcement official on PSL’s twitter handle. The cricketing body confirmed that the matches will be rescheduled at a later time, depending on the coronavirus situation at that time.

Shortly after the news was made public, Salman Iqbal, the owner of Karachi Kings, told the media:

“I have been asking for it to be postponed for the past two days, as we [PSL] was the only cricket going on. But, anyway, it’s a very good decision by the franchise owners and the PCB management.”

“We respect the PCB decision. The health and safety of players and officials is of utmost importance. It’s unfortunate, but considering the situation, we understand the rationale.”

As of now, there are 184 confirmed cases of COVID-19 in Pakistan according to the latest statistics, with 2 in Punjab. The number of cases seems to rise with every passing day. 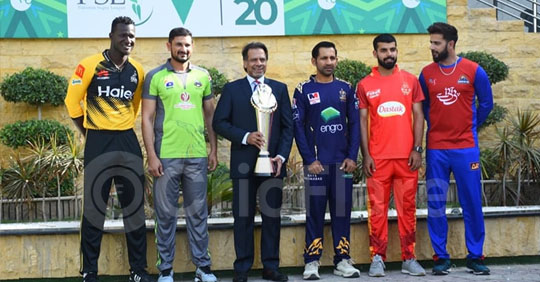 The Punjab province, of which the PSL 5 semi-final and final venue Lahore is a part of, is under Section 144, a law that bars all private and public sports activity along with other public gatherings. The PCB had earned special permission to have the remaining PSL games behind closed doors at the Gaddafi Stadium, but the venue still maintained a big presence of mediapersons during the last few completed matches. Moreover, post-match presentation ceremonies and press conferences were fairly crowded with representatives of the PCB and other stakeholders in attendance.