The tournament which has captured the imagination of the American cricket fans will showcase talent from all around the country as this year it has taken the format of Regions and not just individual clubs. The Regions taking part are New York, Atlantic, South East, South Central and North Central. Chairman of Cricket Council USA (CCUSA) Mahammad Qureshi explained the reasoning behind the move to have Regions play. “We wanted to improve the quality of the tournament so we decided that instead of individual cricket teams taking part, trials can be had amongst teams in each region and the best players can be selected to come out and take part.” 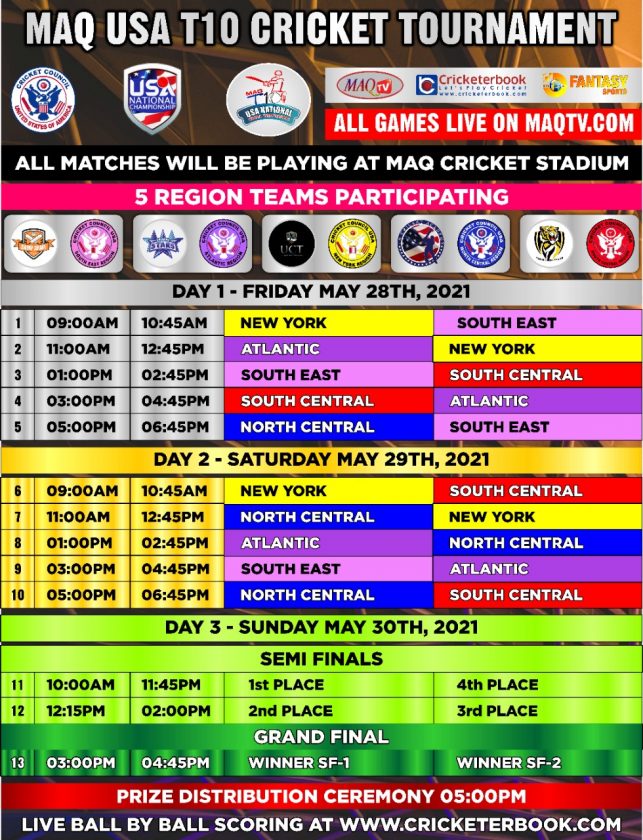 Qureshi, who has been a tireless worker in the development of American cricket says that this year’s USA Nationals, Maq T10 can be of benefit for USA Cricket because it can be a tournament where they can watch and get the cream of the crop when it comes to talent. “A lot of big name players from around the country will be taking part in this tournament so the national body can have a look in to see the best talent and channel that into their system.”

Qureshi has been spending heavily in order to host this tournament since 2014 and given the fact that it is a 10-over affair the non-stop action has gripped fans. “While fans will not be able to attend the games, they will be able to take in the action on MaqTv which has become the home for American cricket.” Qureshi added that there has been major upgrades to his cricket ground and all players will be safe. “There has been a major upgrade of the Maq Cricket Stadium where it is Covid 19 compliant because the safety of players is of paramount importance. We are big areas for teams to social distance and there are separate areas for players to have their lunch and drinks.”