One of the strongest teams in the 11th edition of US Open T-20 Cricket, Houston Stars featured the likes of Umer Gul, Sohail Khan, Hammad Azam from Pakistan and other first-class cricketers from around the world.
The team started their campaign by defeating Titans Cricket Club and won by 6 wickets. Houston Stars first won the toss and chose to field first. They successfully restricted Titans Cricket Club to 67 in 10 overs and chased the target of 68 in just 8.4 overs. The man of the match award was clinched by Sohail Khan.
In the next match, Houston Stars faced Miami Sharks and again chose to field first after winning the toss. In just 10 overs, Houston Stars scored 116 with the loss of 5 wickets; whereas, Miam Sharks fell short of the target and just managed 69 in 10 overs with the loss of 9 wickets. For Houston Stars, Rameez Raja junior, Syed Adeel, Hammad Azam and M Farrukh each contributed noteworthy knocks in double figures: 14, 23, 34 and 21 respectively. In comparison, for Miami Sharks only Samih Sadiq managed 28 runs off 13 deliveries and the rest of the batting order collapsed without managing any double figures. 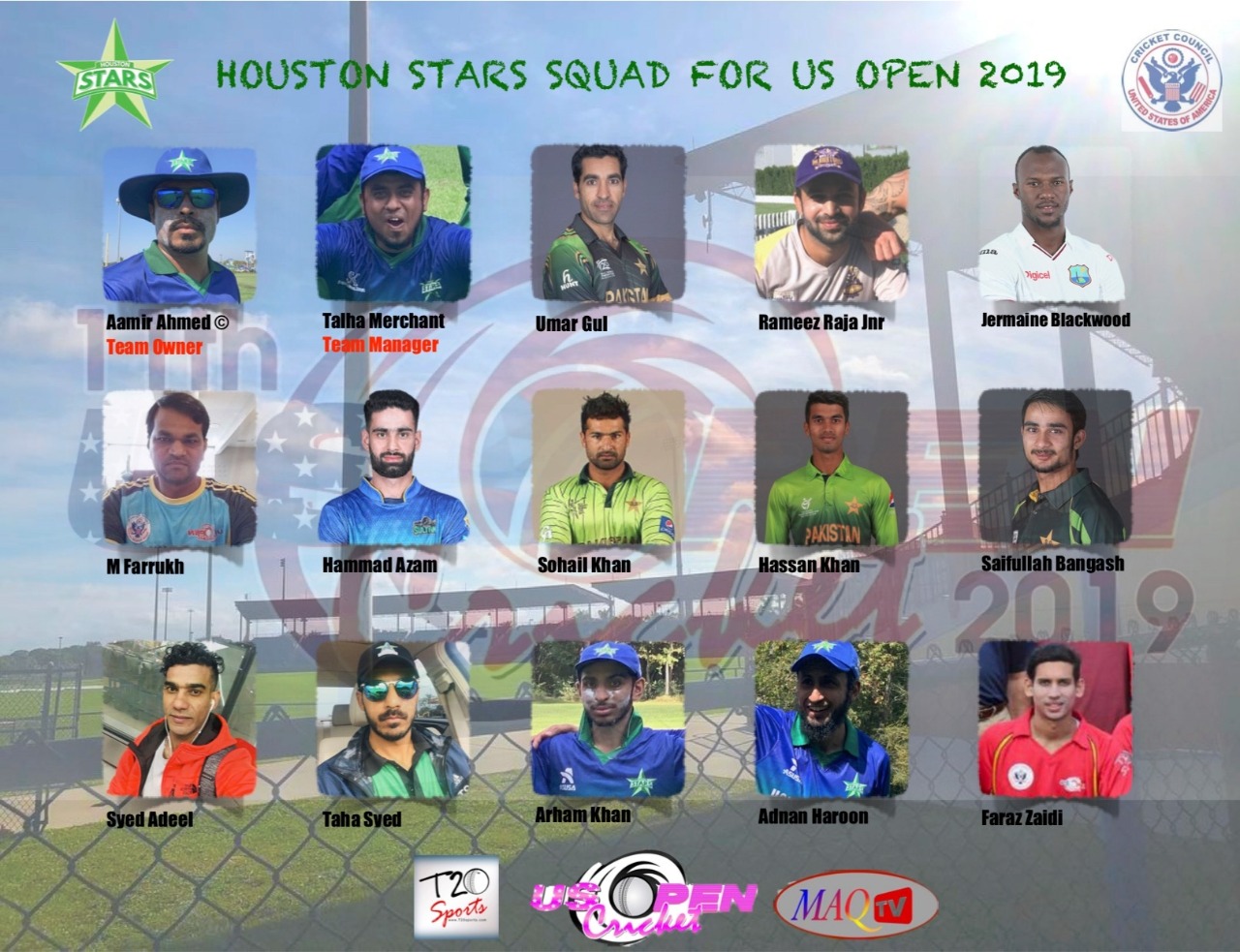 In their third match, Houston Stars clashed with Michigan CA where Michigan CA won the toss and chose to field first. They successfully managed to restrict Houson Stars to 103 runs in 10 overs with the loss of 4 wickets but the match turned out to be a nail biting affair as Michian CA only reached the target with one delivery to go in the last over and 7 wickets in hand. For Houston Stars, M Farrukh (14 runs off 13 deliveries), Hammad Azam (23 off 9 balls strike rate of 255.56), Sohail Khan (33 off 16 balls with a strike rate of 206.25) and Syed Adeel (12 runs off 6 deliveries) scored the major chunk of runs.
In reply, Michigan CA started off their chase with the opener Nikhil Kanchan scoring 26 runs off 18 balls and one down batsman Abhilash Reddy adding solid 40 runs off just 24 balls with a strike rate of 166.67. In their continuation of successful chase, Mahfuzur Rahman hammered 20 runs off just 5 balls with a strike rate of 400 and together the Michigan batsmen cruised their team to victory with the loss of only 3 wickets in 9.5 overs.
In the fourth quarter final, Houston Stars faced Faislabad Falcons, another team with solid players like Ruman Raees from Pakistan. Winning the toss, Houston Stars chose to field again and restricted Faislabad Falcons to just 110 in 15 overs. Houston Stars chased this target comfortably in 13.2 overs with the loss of 5 wickets. For Faislabad, Ashhar Mehdi, Shaheer Hassan and Ali Samad managed decent scores of 18/16, 15/17 and 20/13, respectively. For Houston Stars, the opener Adnan Haroon gave a harsh treatment to Faislabad bowlers right from the start by scoring 32 runs off 20 balls with 2 fours and 2 sixes. He was well supported by M Farrukh who managed 24 runs off 21 balls with 4 fours. Showing his ability to score runs consistently, Hammad Azam further added 25 runs off just 12 balls with three sixes and a whopping strike rate of 208.33. With the help of these batsmen, Houston Stars qualified for the semifinal winning by 5 wickets.
The first semifinal of 11th US Open T-20 Cricket did not turn out to be an exciting event as expected since Houston Stars collapsed for just 49 runs losing all the wickets in 10 overs. Taking advantage of the wicket and the conditions, Somerset Cavaliers had won the toss and chose to field first. Due to the consistent rain in Florida, the wicket proved to be troublesome for the side batting first as the ball kept low, skidded and did not carry quickly because of the wet outfield. Hence, Somerset Cavaliers easily knocked out Houston Stars out of the tournament by winning the semifinal as they chased 50 runs in just 4 runs with the run rate of 12.50 with the loss of only one wicket.