ORLANDO/FL- USA: All-rounder Zishawn Qureshi has been very consistent with both bat and ball over the past eight months and is now looking to make the next grade in his cricketing career
Speaking to News929 :” My short term goal would be to continue my form and bring home a club championship for my local club.” At the moment he plays for the Orlando Stars in the Florida Cricket Conference and over the weekend lashed 43 runs to lead his team to victory over the Orlando Lions. 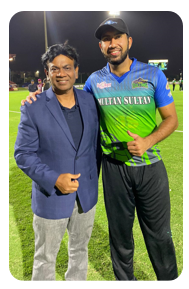 His new found consistency has seen him win matches single- handedly for the club. “My medium term goal would to be able to use these last eight months to boost my chances at getting in a premier league set up.” The next major tournament for Qureshi would be the USA Nationals Maq T10 and this takes place in April. He did very well at this tournament last year but has his eyes fixed on the Caribbean Premier League CPL where he will be entering the draft that opens on February 15.
For two years he has trained with the Guyana Amazon Warriors and this has benefited him. “The times I spent with Guyana did a lot for me because I saw first hand the work that is needed to make it big.”
Buoyed by these stints Qureshi is now hooked on taking it to the next level. “My Long term goal would be to get involved in the national set up or play overseas club/domestic cricket.”
The improvement in his game has been put down to the volume of work he has done in recent times. “The biggest factor has been the amount of match practice I have received and the amount of opportunities that have been presented to me during these last eight months. Match practice and opportunities have been a big boost however, the mental strength and confidence from being around guys live Yuvraj Singh in GT20 have helped my game immensely.”