A day before this year’s GT20 tournament, Geoff Lawson set Salman Nazar 14 to get in one over. This was in the indoor nets at Brampton Sports Centre. Lawson, the former Australian fast bowler, who is now the coach of the Toronto Nationals, was taking a short run-up and hurling the ball towards 28-year-old Salman, a left-arm spinner who works assiduously on his batting.

Lawson seemed to be increasing the pace of his throws with every ball.

Salman was being creative in his bid to knock off the target.

Of the final ball of this mini-challenge, Salman needed 4 runs. Lawson asked him if he was ready. Salman, a little over five-and-a-half feet in height and “one of the shortest cricketers going around,” according to some local club cricketers, was helmeted, and waiting. Lawson fired it in on middle and leg. Salman shaped up for a sweep and paddled it behind his shoulder.

Lawson liked this. He walked up to the batsman, placed his hands over his shoulder and said – as Salman would reveal later – “if you don’t want to go for big hits, the paddle is a great shot to play.”

Pakistan born Salman Nazar arrived in Canada when he was six years old. He liked watching left-arm spinners from a young age and adored Daniel Vettori for his control and variations.

Salman first played for Canada in 2012. There is video on YouTube where Salman is hitting a splendid cover drive against a left-arm medium-pacer in a deserted ground, in a game between Sheridan BCC and Toronto SCC, … in ultra slow motion. The clip as 330 views. And zero comments.

According to his club-mate and fellow Canada cricketer Rizwan Cheema, Salman is never sure which bat he is going to use when his turn arrives.

“Salman always tells me, ‘Oh Rizwan bhai, this bat of yours is awesome. Can I play with it?’

“And then he takes the bat and plays all sort of practice shots with it in the dressing room. But when the time comes for him to walk in, he picks up some other bat – which he has probably not even seen before – and goes in.”

Salman is a left-arm spinner first, but as many as five club cricketers insist he likes to practice his batting more than his bowling.

Salman Nazar didn’t get a chance to play for the Vancouver Knights in the first season of the GT20. His Canadian team-mate – and left-arm spinning allrounder – Saad Bin Zafar – played all eight games and basked in the limelight with a Man-of-the-Match performance in the final. 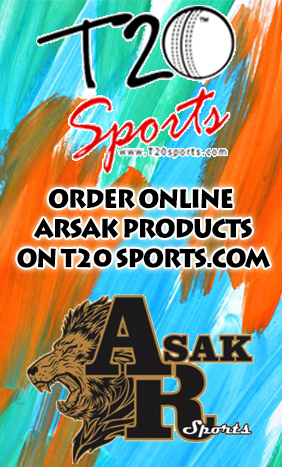 When Saad and Salman were interviewed after the tournament, Salman was candid enough to talk about the bittersweet experience: wanting to play but yet not wanting Saad to fail.

In the opening game of this year’s tournament – playing for Toronto Nationals against his old team Vancouver Knights – Salman conceded 30 runs in three overs. He didn’t get to bat.

Two days later, against Edmonton Royals, Salman went through four overs for 24 runs. And picked up the wicket of Faf du Plessis off his very first ball. An arm-ball to start with. Faf, batting on 28 off 17 and in his groove with three emphatic sixes against the medium-pacers, made room for the cut. The ball skidded through and rocked off stump.

Salman immediately ran towards offspinner Chris Green, who joyously lifted him high. “Chris was telling me where to bowl,” he said later. “So his experience against Faf really came of use.”

For the next couple of hours, the game swung and swung again. Toronto Nationals were out of it…. until Manpreet Gony dragged them back into contention with a boisterous 33. When Gony was dismissed, the team still needed 27 off 17. And only three wickets remained.

Salman was about to head out to the field.

Which was when Lawson told him: “Stick to your strengths instead of looking for big hits.”

Shadab Khan, the Pakistani legspinner, tossed one up on middle and leg.

Salman, on his knees, scooped to fine leg. The moment the ball beat the fielder, he pumped his left fist with high exuberence. Mark Montfort, another Canadian cricketer, gave him a hand.

There was another four in the next over, bowled by Ben Cutting, and Toronto got to the finish line with 7 balls to spare. Salman Nazar made 9. But it’s a 9 he is unlikely to ever forget.

Before he headed out of the ground, Salman signed autographs for some of the ball boys. A couple of them requested selfies. Shouts of “Salman bhai” were heard from the milling crowd.

Salman represents the local Shahid Afridi Cricket Club, which was launched last year. He has been a huge admirer of Afridi since his formative years and now, come next week, will have a chance to bowl to – and maybe even bat against – the legend. It’s a battle nobody will hype up. But it’s a battle that means so much to one half of that duo.

What will happen, we cannot say.

But Salman will go out of his way to prepare. That much is certain.