Joaquin Phoenix won his first Oscar on Sunday for his terrifying performance as an isolated loner who becomes one of the world’s best known comic book villains in Joker, and invoked his late brother River Phoenix in one of the most emotional acceptance speeches of the night.

Phoenix, 45, won the best actor Oscar after three previous nominations, crowning an awards season that has seen him sweep every major prize for his role in the standalone origin story of Batman’s archenemy.
“I’ve been a scoundrel in my life, I’ve been selfish, I’ve been cruel at times, I’ve been hard to work with. I’m grateful so many of you in this room have given me a second chance,” Phoenix said while accepting his award. “When he was 17, my brother wrote this lyric, he said: Run to the rescue with love and peace will follow,” he said in concluding his speech tearfully to a standing ovation. River Phoenix died of a drug overdose at a Hollywood night club in 1993 at age 23.

Phoenix also talked about animal farming and cruelty. “I think that we’ve become very disconnected from the natural world, and many of us, what we’re guilty of is an egocentric worldview,” Phoenix said. “The belief that we’re the center of the universe. We go into the natural world and we plunder it for its resources, we feel entitled to artificially inseminate a cow, and when she gives birth, we steal her baby, even though her cries of anguish are unmistakable. And then we take her milk that’s intended for her calf and put it in our coffee and our cereal. And I think we feel the idea of personal change is that we have to sacrifice something, to give something up, but human beings at our best are so inventive, and creative, and ingenious, that I think that we…. When we use love and compassion as our guiding principles, we can create, develop and implement systems of change that are beneficial to all sentient beings and to the environment,” he added. 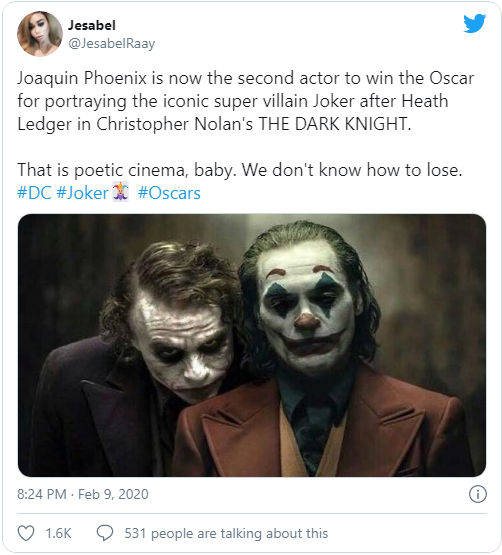 Phoenix is a big supporter of animal right and recently went to a slaughterhouse right after accepting his SAG Award to comfort pigs with other animal lovers.

Dark and unsettling, Phoenix’s Joker is far removed from the comic book characters traditionally seen on screen. Matthew Belloni, editorial director of the Hollywood Reporter, described it last year as “among the most chilling characters I have ever seen in film.”

Publicity averse and intense, Phoenix has a reputation for completely inhabiting characters that have ranged from country singer Johnny Cash in “Walk the Line,” to Jesus Christ in “Mary Magdalene” and an impressionable drifter who enters a cult in “The Master.”

In 2010, he almost succeeded in fooling the world that he had given up acting to try to become a rapper in the fake documentary “I’m Still Here.”

A strict vegan and advocate for the environment, Phoenix was born to missionary parents who traveled through Central and South America before settling in Los Angeles, where he became a child actor.